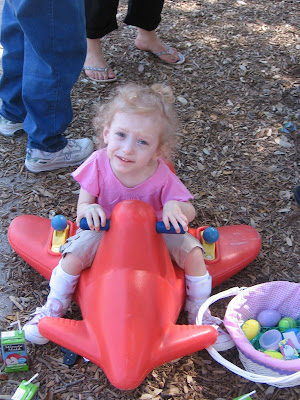 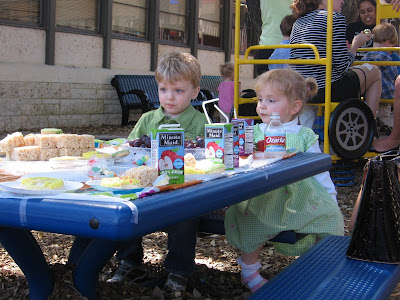 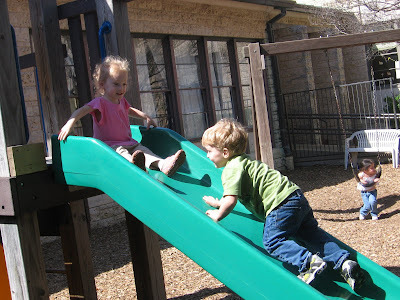 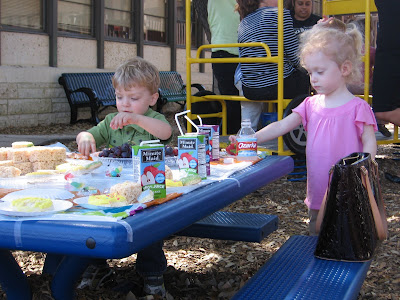 Today at MDO the kids had an Easter Egg hunt. It was a beautiful day...over 80 degrees. I went to pick them up a little early so I could participate in some of the festivities. The teacher said that Mack and Sophie had absolutely no interest in hunting eggs and just wanted to play on the slide. Mack was however, VERY interested in the food table. That boy loves his food.

When I got there Grace was seated in the plastic airplane (which broke my heart) and an older woman was sitting with her. I sat on the ground next to them and we began talking. She mentioned, out of the blue, that she had just see the movie My Left Foot. It kind of threw me off guard a bit. I guess someone told her that Grace has CP and she was trying to relate. I then went into my "There is such a wide range of CP and every person affected is different" spiel. It was incredibly awkward. Gosh, some people really don't get it do they.
Posted by Jacolyn at 2:42 PM

Mack looks so grown up sitting at the picnic table!

I've been thinking a lot about the Egg Hunt coming up and wondering how to include Crew- carry him or use the walker. I hate stuff like that. The lady mentioning "My Left Foot" reminds me of some similiar frustrations I'm having with people right now. No, some people just don't "get it" and some never will, but at least she was sitting with Grace. Maybe she is trying to understand.

Looks like the guys had fun. I am sorry about the lady at the program

Mel, You're right. I think she was trying to understand and she was very nice. The whole thing was just a little different. I just never though about how little people know about things like CP. I know I didn't before Grace.

Is that little girl sitting next to Mack his girlfriend? Just kidding. Love Grannie D.

Me too Jacolyn. Before Grace, I didn't know much about CP. Like most people, I would blurt out something to "ease" the awkwardness. I'm glad she was sitting with Gracie... she must care. Love, J

Hello. This post is likeable, and your blog is very interesting, congratulations :-). I will add in my blogroll =). If possible gives a last there on my blog, it is about the Celular, I hope you enjoy. The address is http://telefone-celular-brasil.blogspot.com. A hug.

Aubrey loves this pic of Grace. Everytime I pull up youro blog she screams "GRACE-AIRPLANE!!!" See you Friday.

No, people don't get it. It's sad because I think people mean well. Sometimes I have found though that the more some try the more they need to just stick their foot in their mouth. I find myself giving the same type of "explantion" and trying to hide my frustration. Before Makily I was just as ignorant as the majority of people I find myself wanting to smack.

She is a beauty.